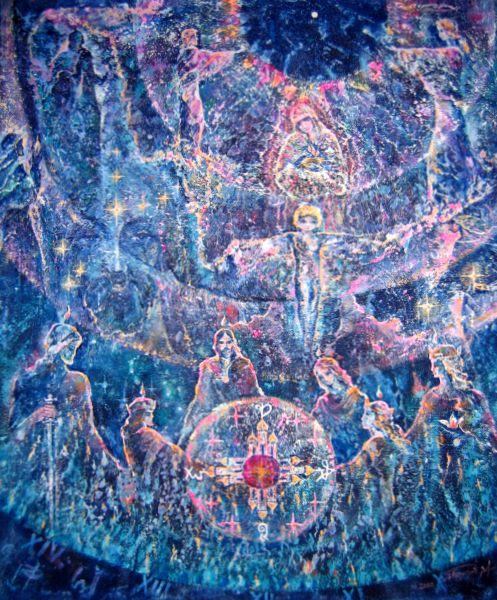 The nature of the Northern Black Sea Coast is marked by a peculiar character. Today the seaside steppes of the region have almost entirely been ploughed up and turned into farmland. But the small plots left untouched in the reserve areas, delighting with unique colours, odours and sounds.
The seaside. There are mostly salt marshes and innumerable islets, sand bars and spits, earth and rocky precipices and chaoses, off-shore boggy shoals stretching for hundreds of kilometres, salt lakes and fresh-water swamps of the rivers' lowers. All these wastes are birds' ideal habitat: land predators would hardly be able to penetrate here unnoticed, people either wouldn’t cause any disquiet with their presence.
Our narration is about the birds of the shores and islands of the Northern Black Sea area, also about the ornithological reserves, that have to preserve and study the bird kingdom, popularize the ideas and principles of protecting birds, when there less space remains for them.
About 300 bird species are found in the Ukrainian part of the Black Sea Coast during nesting, transmigration and hibernation. It is hard to tell about all of them. The colour and black-and-white photographs can help you visiting the innermost spots of the reserves in all the seasons, to see the diverse world of birds, their cares, joys and tragedies...

Winter on the Black Sea and Azov Sea coasts can be very different each year and the number of hibernating birds depends on its peculiarities. In a warm winter, when the shoals rich in feed are not frozen up, vast numbers of waterfowl and swamp birds hibernate here — mute and whooper swans, white-fronted and greylag geese, mallards, pintails, wigeons, teals, common and great white herons and many others. During a severe winter very few kinds of them stay here: swans, red-breasted mergansers, black-throated divers, northern diving ducks. Black-headed and herring gulls, divers, grebes and ducks hibernate regularly on the southern coast of Crimea.
The bird's spring comes around from the middle till the end of February, when the transmigration of waterfowl starts and eggs appear in the nests of cormorant and raven, the earliest nesting birds.

March is the month of the mass transmigration of waterfowl and the beginning of the transmigration of other birds —snipes, gulls and the passerines... At the same time the colonies of gulls and large herons are formed.
In April the transmigration of many small birds reaches its highest point, particularly numerous are arc ruffs, dunlins, little stints, black-headed and little gulls, black-and white-winged terns, of the passerines — willow warblers, starlings, skylarks, house martins and swallows, spotted flycatchers, redstarts. It is also the time when most colonial species of gulls, terns, ducks and herons are extremely busy with oviposition. New baby birds appear of cormorants, common and great white herons, great black-headed and herring gulls.

May is the month of nestlings, and the last one of transmigration, when some northern snipes and late passerines are still flying.
In June mallard drakes flock together for moulting, and at the beginning of July mute swans, coots and shelducks come to moult areas. Till the end of July the colonies get deserted, the young and old birds leave for other places of more feed.
So-called post-nesting movement of birds can be observed very early on the Northern Black Sea Coast. Northern snipes-ruffs, broad-billed sandpipers, dunlins, curlew sandpipers come here sometimes at the beginning of July, and in August and September they are plentiful on the shores.
In September the transmigration of the majority of the small passerines is at its height, simultaneously on the estuaries and shoals enormous flocks of waterfowl (coots and ducks) begin gathering. In October geese join to them. The transmigration continues till the cold snaps and freezing up of shoals, it often begins in December and even in January.

Chernomorsky and Azovo-Sivashsky reserves were created in 1927. The aim was the conservation the bird colonies. The Chernomorsky Reserve includes parts of the coastline of the Dnierprovsky Estuary, shoals and islets in the Jarylgachsky, Yagorlytsky and Tendrovsky Gulfs. Nowadays Chernomorsky Reserve is a complex nature-protection establishment where flora and fauna is studied and preserved. However, birds are the main values: the colonies of the Mediterranean gull are unique in their size (up to 200,000 couples) and there are huge assemblages of mute swans during moulting, and particularly in hibernation, in some years about 13,000 of both mute and whooper swans pass winter here.
The Azovo-Sivashsky Reserve (since 1957 the Game Reserve Centre) comprises small islets and ports of larger islands in the central part of the Sivash — Kitay, Martynyachy, Kuyuk-Tuk, Churyuk and a section of the Island of Biryuchy in the Azov Sea. Lately vast areas of the central Sivash have been added to the Reserve. Shelducks gather at this unique place for mass moulting, myriads of gulls, snipes, ducks and other waterfowl pause to rest here during transmigrations.

Parts of Churyuk and Kuyuk-Tuk Islands have been reserved to conserve the original flora of the Sivash steppe areas. Kitay and Martynyachy Islands are reserved like the places of mass nesting of birds, including herring and great black-headed gulls.
In 1949 the Lebyazhyi Islands (Swans' Islands) in the Karkinitsky Gulf of the Black Sea were reserved. Now they are affiliated societies of the State Game Reserve Centre. The main species nesting at the islands has always been the herring gull forming the largest on the Black Sea Coast colony having number 10,000 couples. The only permanent colony of the Caspian tern and one of the two colonies of the great black-headed gull are also situated here. Lately, about 20 kinds of birds have nested on the islands, there are large colonies of cormorants, herons, little and great egrets.

Two last decades the environmental situation of the Lebyazhyi Islands and the majority of areas of Crimean Sivash have substantially changed. Rice-growing got wide spread since Dnieper water has come here by North-Crimean Canal. It caused a considerable freshening up of the salt shoals of the Karkinitsky Gulf and Sivash. At the places of water discharge vast growths of fresh-water vegetation have sprung up, some plots have been bogged up and as a result the structure of fauna, including the bird population have undergone great changes. Thus, many bird species that had never nested in the Crimea began to nest at the Lebyazhyi Islands and reached a great number. The abundance of the new kinds of feed and the reserve atmosphere of the islands have attracted here for nesting firstly some species of herons, then followed the glossy ibis, cormorant, common and red-crested pochards. The same species (excepting cormorant) have formed several colonies in the bogged-up plots adjoining the Sivash, where, besides, red-necked grebes, purple and night herons, bitterns have appeared.

However the water-supply and irrigation of these areas have caused a certain damage to local fauna as well.
The steppe dry-climate species that quite recently were rather numerous — great bustards, steppe eagles, demoiselle cranes, stone curlews, quails have almost or completely vanished; the steppe passerines, especially skylarks have diminished in dozens of times. The study of the occurring changes is one of the principal tasks of the scientists of the Black Sea Reserves.
The Ramsar Convention on Wetlands of International Importance granted the status of the guarded territories to three main ornithological reserves. There are another, not so famous reserves in the Northern Black Sea region, they are interesting and unique territories as well. Dunayskiye Plavni, in particular, is the part of large Danube delta where both inimitable landscapes and rare plant and animal species can be watched. There are several colonies of herons in the Danube’s delta, situated in the USRR . But the main ornithological wealth of these places are colonies of spoonbills and pygmy cormorants, large assemblages of pink pelicans at feeding. Some sections of the Danube delta terrain were made guarded territories in 1973 and, in 1981 they became a self-dependant reserve.

Obitochnaya Spit and Molochny Estuary are situated on the north-western coast of the Azov Sea. There are two most interesting reservations created in 1974. On the islands and spits of these reservations there are large colonies of the Mediterranean and slender-billed gulls and various terns. The aquatorium of the reservations is the place of rest and feeding for enormous aggregations of swamp and aquatic birds, a great number of greylag geese among them (usually scanty in other parts of the region).
The precipitous shores of the Tarkhankut and Kerch Peninsulas in the Crimea are beautiful in their own way and rather interesting from the ornithological point of view. They are populated by myriads of birds of the sea-rock and steppe-rock species. The most valuable of them are the shags of Tarkhankut, ruddy shelducks of the Kerch Peninsula and saker-falcons inhabiting both these areas.
Varied and inimitable nature is easily hurt. The Northern Black Sea Coast is not an exception. The duty of everyone who lives and works in this sunny place, who comes here for vacations, is to remember about the environment. The protection of nature is the cause of nationwide importance.