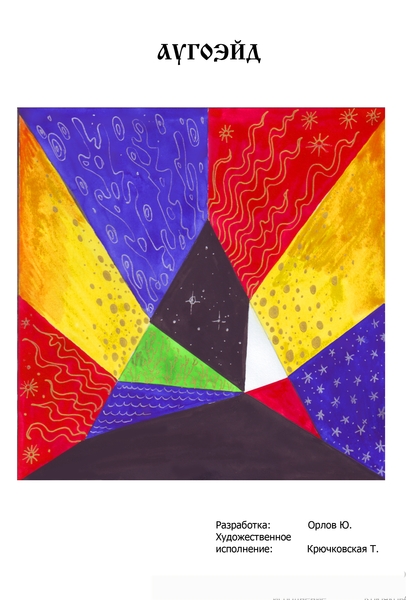 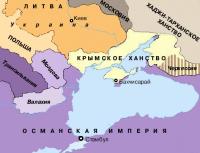 Tavriya and Crimean khanate - in a cultural aspect.

It would be more correctly to say "Tavriya during the Crimean khanate" — in fact the territory of present-day Khersonschina as well as all Northern Black Sea Coast area many hundreds years belonged to the Crimean khanate structure. During that time different tribes wandered between various Turkish fortresses in the vast expanses of the Black Sea area.

The khanate included the Crimean peninsula (except the south and southwest coast and ports, controlled by the Republic of Genoa) and the steppes of modern southern Ukraine and Russia, also known as Desht-i Kipchak.

The Crimean Khanate (Qırım Hanlığı) was one of the many remnants of the Golden Horde, the north-western division of the separated Mongol Empire. Located north of the Black Sea, the Crimean Khanate (1449-1783) also proved to be the most lasting remnant. The term "Tatar" derives from an old Mongolian tribe. It eventually came to be a term used by Europeans for the inhabitants and warriors of Mongol Empire as a whole, especially the Golden Horde division. A similar and interchangeable term is "Tartar," which probably came from the corruption of the word "Tatar" with Tartarus.

The internal strife among the Hacı's sons followed after his death. The Ottomans interfered and installed Meñli I Giray, a son of Hacı I Giray to the throne. In 1475 the Ottoman forces, under the command of Gedik Ahmet Pasha conquered the Principality of Theodoro and Genoese colonies in Cembalo, Soldaia, and Caffa. The khanate from then on entered the protection of the Ottoman Empire. While the Crimean coast became an Ottoman Kefe sancak, the khans continued to rule in the rest of the peninsula and the northern steppes. The relationship of the Ottomans and the Crimean Tatars were unique. The sultans treated the khans more as allies than subjects. Though the chosen khan had to receive approval to the Sultan, they were not appointees of Constantinople. (Halil İnalcık) The Ottomans also recognized the legitimacy of the khans in the steppes, as descendants of Genghis Khan. The khans continued to have a foreign policy independent from the Ottomans in the steppes of Little Tartary. The relations of the khans and the Ottoman Sultan were governed through diplomatic correspondence. The khans continued to mint coins and use their names in Friday prayers, two important signs of sovereignty. They did not pay tribute to the Ottoman Empire, instead the Ottomans paid them in return for their services of providing skilled outriders and frontline cavalry in their campaigns. (Alexandre Bennigsen)

The alliance of Crimean Tatars and Ottomans was comparable to Polish-Lithuania in its importance and durability. The Crimean cavalry became indispensable for the Ottomans' campaigns in Europe (Poland, Hungary) and Asia (Persia). This made Crimean Tatars dependent on the booty attained after the successful campaigns, and when the Ottoman military campaigns began to fail, the Crimean Tatar economy also began to decline.

In 1502 Meñli I Giray defeated the last khan of the Great Horde putting the end to the Horde's claims on Crimea. In the 16th century the Crimean khanate pretended to be the successor authority of the former Golden Horde territory, Great Horde and hence over the Tatar khanates of Caspian-Volga region, particularly the Kazan Khanate and Astrakhan Khanate. This resulted in rivalry with Muscovy for dominance in the region. A successful campaign of Devlet I Giray to Moscow in 1571 finished with the burning of the Russian capital and he was called Taht-Algan (seizer of the throne) after this event. However the Crimean Khanate eventually lost the dispute for access to the Volga due to its catastrophic defeat in the Battle at Molodi just one year later.

The capital of the Khanate was placed initially in Salaçıq near the Qırq Yer fortress, then moved to Bakhchisaray founded in 1532 by Sahib I Giray.